Our last post chronicled the Beatles’ 1964 arrival to the U.S.

First stop on the money-making-train: The Washington Coliseum. The Beatles went on to achieve record breaking success, but did the venue that hosted them garner as much notoriety as the Fab Four themselves?

What’s Happened Since: A Brief (But Far From Boring) History

1965: Bob Dylan plays the Washington Coliseum. The concert marked one of the first times Dylan “plugged in” and went full electric, straying from his usual acoustic set. A photo from the concert was later used as the cover for Dylan’s Greatest Hits album.

1967: The Temptations play the Washington Coliseum. Rock concerts were banned at the arena after a riot broke out, leaving 5 injured and 6 arrested. Yes, a riot. At a Temptations concert. We’ll assume they didn’t always attract such a rowdy crowd.

Is anyone else noticing a trend for this poor building? 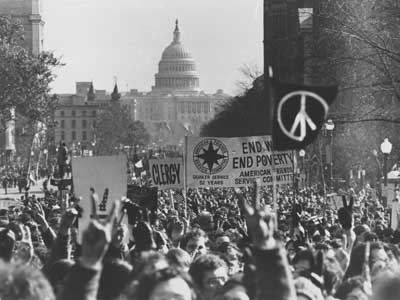 Probably not the crowd the owners had hoped for.

After its stint as a temporary prison, the Washington Coliseum sat virtually vacant. The owners must have taken a page from the Beatles’ playbook, because they sure “let it be”. The building didn’t see much action until more than 20 years later.

2007: Fighting the man paid off! (The Beatles would be so proud.) The Washington Coliseum is added to the National Register of Historic Places.

It seems that the Washington Coliseum followed the same trajectory as the Beatles, burning bright on limited time. The owners weren’t pals with Yoko Ono were they….

But this story ending is a happy one. In 2013, Douglas Development acquired the Washington Coliseum in hopes of restoring its historic structure into a mixed-use property with retail and office spaces. Stay tuned for updates!